Brazil-Canada Chamber of Commerce appoints new management team and leadership for their Board of Directors
Paulo Salomao, a Brazilian executive with vast experience working in Canada was elected new Chair. He will lead the team with the mandate of strengthening and growing commercial relationships between Brazil and Canada.

TORONTO, July 6th, 2017 – The Brazil-Canada Chamber of Commerce (BCCC) announces today the appointment of its new management team with the mandate of fostering even stronger commercial relationships between Brazil and Canada. Managing Director for Asset Management and Pensions at Accenture, Paulo Salomao, was elected by board members as the new Chair on Thursday, June 22nd. With over 10 years of experience in combined strategy, investments and operations expertise, Paulo will continue to advance the excellent services provided to BCCC’s members. Paulo has been a Board Director for the Chamber since 2015 and the Vice-Chair since 2016.

The BCCC’s board has also elected Cory McPhee, Vice-President of Corporate Affairs and Communications at Vale Canada as Vice-Chair. A Board Director since 2010 and an important advocate for the BCCC’s Mining Committee, Cory worked alongside Paulo in developing the recent redefinition of the BCCC’s mission and goals which resulted in the new value proposition and strategic planning for the next years.

In order to strengthen its leadership, the BCCC has also decided to reinstate the positions of President and Vice-President. Marcelo Konig Sarkis, Founder & Principal at Prima IP, and Paola Saad, President at Mandala Group, have agreed to the respective positions of President and Vice-President to provide a robust leadership structure for the Chamber to implement its new value proposition and expand the services offered to members.

Marcelo has been a Board Director since 2013, a member of the Executive since 2014 and an active member of the BCCC since 2009. Marcelo created both the Innovation Science and Technology and the Education Committees of the BCCC. Marcelo is a registered professional engineer in Ontario and registered patent agent in Canada and the United States having practiced almost 30 years in the area of intellectual property and has been asked to speak both in Canada and Brazil on this as a subject matter expert. Marcelo is also the Canadian Lead of the Clean Technology Working Group of the Canada Brazil Joint Committee on the Cooperation of Innovation Science and Technology. Marcelo is a fellow of the Intellectual Property Institute of Canada and a member of the Brazilian Association of Intellectual Property as well as patent advisor to several incubators in Canada and a director of the Ryerson University Alumni Association.

A Board Director since 2014, Paola has been involved with the BCCC since 1994, in various capacities. Paola chairs the Events & Marketing Committee, as well as being a dedicated member of the Trade & Invest Committee. Paola has over 17 years of experience leading and organizing international trade missions and events, in over 40 different sectors with a focus on Canada-Brazil. Paola is recognized as the “go to” person for trade missions & matchmaking between Canada and Brazil. A recipient of “Brazilian Woman in Power”, a joint award from the Ontario and Canadian Federal governments, throughout her career, Paola has thrived in fast-paced environments while leading and managing multiple projects with strict deadlines.

Marcelo and Paola have greatly contributed to the new structure and running of the BCCC in their previous role as executive directors.

All incoming Officers are committed to continue promoting the BCCC as the leading organization to support trade and investments between Brazil and Canada, and to bring value to its members and partners. With this in mind, the BCCC has exciting new activities planned, such as great networking and sectoral events, access to government-organized trade missions, and webinars to share insights and qualified information on business opportunities between the two countries.

Nina Garcia has recently joined the BCCC as Interim Director of Business Development and Operations, replacing Carolina Albernaz during her maternity leave. Nina holds a Master of Global Affairs (MGA) degree from the University of Toronto’s Munk School of Global Affairs, and has previously worked as a student Consultant for the Advanced Energy Center within MaRS.

After four years serving as the Chair of the BCCC, Frederico Marques, Partner & Foreign Legal Consultant at McCarthy Tetrault, has decided to step down to promote a renewal of leadership that will allow the Chamber to continue to grow. He has brought invaluable contribution to the Chamber and will continue to support the organization as a member of the Executive Committee and Board of Directors.

During his four-year tenure as Chair of the BCCC, Frederico led the restructuring process of the organization, which included a redefinition of its membership tiers, mission, goals and value proposition.

Established in 1973, Brazil-Canada Chamber of Commerce (BCCC) is a not-for- profit and independent business association held by the private sector with a primary objective of fostering stronger commercial relations between Brazil and Canada.

Led by a volunteer Board of Directors, President and Vice-President, comprised of renowned industry leaders and experts in conducting business between Brazil and Canada, BCCC plays a vital role in linking players from Brazilian and Canadian private and government sectors facilitating dialogue between both parties and assisting members in identifying key opportunities to expand their activities and further their business interests. 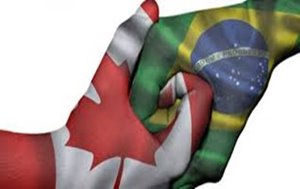